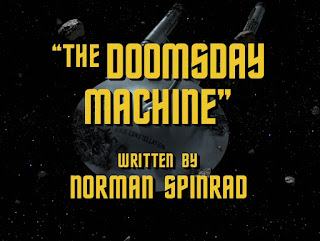 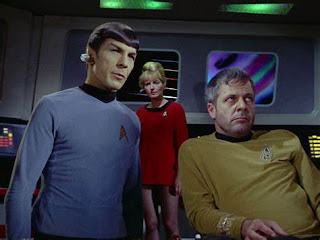 Plot:The Enterprise discovers a weapon capable of destroying entire planets, and a Starfleet flag officer whose crew was killed by the machine jeopardizes the crew on a crazed mission of revenge.

Nitpick:I haven't spoken much about the digital enhancements done on this series awhile back. They were amazing and really worth the effort put in but this is one episode where they really make an excellent episode even better! We actually get a decent red shirt moment here, when Decker tries to flee the guard put up a decent fight. He loses of course but it's a lot better than other episode where the guard is knocked out from behind like a dope. 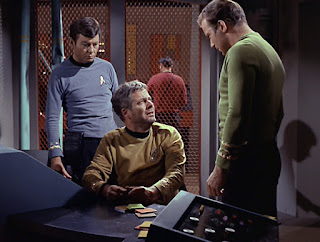 Teaser-The Enterprise is following the trail of a distress call and all they could understand was the name "Constellation". The ship has entered a solar system which has apparently been destroyed. All seven planets are debris now. The Enterprise is following the pattern of destruction to another solar system also blasted to rubble. The Constellation is still missing, it is commanded by Matt Decker. Soon they approach the source of the distress signal, and see the pulverized Constellation.

Act 1-The Constellation is adrift as the Enterprise approaches. Sub space interference is preventing communications. The ship is barely heritable, but some areas are able to sustain life. Kirk decides to beam over with a damage control party, and leaves Spock in command on the Enterprise. On the Constellation, the ship is a mess. There are no signs of crew, and indications are they knew something was happening. Scotty reports the warp drive is a piece of junk but the impulse engines are ok. On the way to auxiliary control, they find Matt Decker inside unconscious. When they try to wake him, Decker is clearly in some kind of deep shock. Decker tries to explain what attacked them, when Scotty pulls a log entry where Decker explained that they are pursuing the thing that destroyed the planets. Decker explains the ship was dead so he beamed his crew down. Then the transporter went out. Decker explains what he was saw was something straight of hell. The crew was beamed down to the third planet, which no longer exists. Decker explains how he saw a thing hovering over a planet slicing chunks out of it with a force beam. It is impenetrable with phasers. Spock speculates it was an automatic weapon that attacked the Constellation, a weapon which is designed to smash planets into rubble. According to there projections it came from another galaxy, and is headed into the most densely populated section of their galaxy. Kirk speculated that it was a doomsday machine, built by an alien race as a bluff and never meant to be used. A lot like the old H Bombs. Kirk tells McCoy to take Decker back to the Enterprise while he stays behind. When the two arrive, they find the ship in red alert. It seems they have found the planet killer and it is after them.

Act 2-The Enterprise is keeping its distance. Kirk says they need to find some way to stop it. Kirk tries to get beamed back but the planet killer attacks and knocks out the transporter. The subspace interference is also making communications difficult. Kirk tells Scotty to get some kind of maneuvering power while he works on activating the viewscreen. On the Enterprise, when Spock refuses to do a direct attack Decker pulls rank and takes command. Spock argues against that idea but Decker quotes regulations and so Spock gives in. On the Constellation Kirk is working on the viewscreen when Scotty reports he has some maneuvering power. Decker tries to attack the planet killer, even though he knows phasers are useless. Kirk gets the viewscreen active in time to see the Enterprise pointlessly attacking the planet killer. Phasers are having no effect. Suddenly the planet killer starts to pull the Enterprise inside. Spock insists that Decker veer off, and when Decker refuses he says he can relieve Decker on the grounds of him trying to kill himself. Decker agrees but it's to late, the Enterprise is being pulled inside.

Act 3-Kirk is able to get the Constellation moving, and when he comments about phasers Scotty tells him that he has a bank recharged. Kirk is able to use the Constellation to distract the planet killer, and free the Enterprise. When the Constellation is being pulled in, Decker returns the favor and frees the ship. The Enterprise is heavily damaged, but they can pierce the sub space interference enough to contact Kirk. Kirk is enraged when he finds out Decker has been in command, and orders Spock to take over on his personal authority as captain of the Enterprise. Spock says that he is relieved, and Decker comments that Spock is bluffing. Spock responds that Vulcans never bluff. Decker steps down and Spock tells him to go to Sick-Bay. However, instead Decker beats the guard escorting him and heads to the shuttle bay. Moments later, an authorized shuttle is launched and they soon realize Decker is on board. He explains that since nothing can blast through the hull, he's going to drive the shuttle right down the killers throat. Spock says he will be killed, and Decker replied that he has been prepared for death ever since he killed his crew. Despite Kirk's attempts to get him to change his mind, Decker follows through and enters the mouth of the planet killer. Killing himself instantly.

Act 4-Kirk says that the tragedy is that Decker died for nothing. Sulu then reports a drop in the machines power emanation's. It seems that the shuttle explosion may have affected. Kirk then gets an idea. He has Scotty rig a time delay detonation. If they overload the impulse engines the explosion may be powerful to destroy the machine...from the inside. Kirk says he is going to drive the ship right down that things throat. Spock says he will be killed, but Kirk insists that he will wait til the last second to activate the delay detonation and beam back just in time. Spock explains that the damage to the transporter makes it a big risk. Scotty is beamed back and the transporter malfunctions again. As Scotty rushes to make repairs, Kirk begins driving the Constellation into the planet killer. Kirk activates the detonation, but the transporter is unable to beam him aboard. As the Constellation gets closer, Kirk tells them to beam him aboard. Scotty gets it to work..just barely time. Kirk is beamed off and the explosion destroys the planet killer for good. 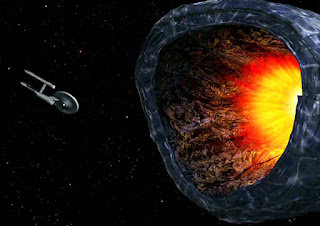 Final Thoughts:Some episodes everything comes together perfectly, this is one of them. Hitting on social issues like the atomic bomb and homages to Moby Dick and other classics. William Windom was excellent in the role. And Leonard Nimoy once again shines, it's amazing how you can tell what Spock is thinking even with him staring blankly ahead. The ending is clearly padded, I get the feeling that they didn't have enough story to fill the run time, but the tension is still excellent and it remains one of Kirk's closest calls ever. I said the music yesterday was amazing, this episode's score almost beats it. This music was so amazing that the soundtracks for this episode and Amok Time were released as an album. I owned it and loved it.