Well my friends, we made it. 79 episodes and we finally got to the final one produced and aired. Is it good? Do I really need to answer that? 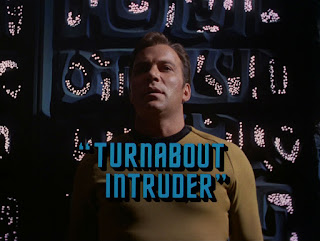 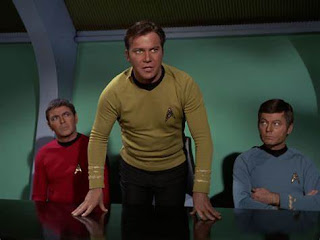 Plot:A mad scientist tries to take control of the Enterprise by switching bodies with Captain Kirk

Nitpick:How exactly did the transfer get reversed when Kirk and Lester were nowhere near the machine that transferred them in the first place? 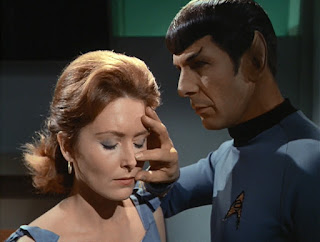 Summary: (To avoid confusion I will keep referring to Kirk and Lester as there real identities despite being in different bodies)

Teaser-The Enterprise has responded to a distress call from an expedition on Camus II. When Kirk, Spock and McCoy beam down they find Janice Lester, an old acquaintance of Kirk, gravely ill and her caretaker Dr.Coleman tending to her. Spock detects faint life readings but when they go to check it out Lester seems to want Kirk to stay with her. He does, and she says she had hoped to never see him again. She resented that his world of starship captains excludes women. Kirk says it's not fair, and she tortured and punished him because of it. Lester says she loved him, and Kirk says they'd have killed each other. Kirk goes overt to check on a device nearby, and Lester presses a button which pins Kirk yo the machine. She then activates the device, and soon a life energy transfer occurs and Lester and Kirk switch bodies.

Act 1-Lester awakens, in Kirk's body, and is delighted the process worked. She takes Kirk down and seems to be preparing to kill him. Kirk awakens, and is confused what is happening. Suddenly Lester hears the others coming back, and quickly makes it look as it did before. Lester asks McCoy for a report and he explains there was nothing they could do to help the people. As McCoy gives a report Kirk starts to moan and Coleman says she is near death. McCoy suggests beaming her up to the Enterprise and Lester has the ship beam them up. As Kirk is led to sick-bay Lester tells McCoy that she is very special to "him" and wants her to get the best care. In Sick-Bay, Coleman asks Lester why she didn't kill Kirk and she says there wasn't enough time. Colemans says she couldn't do it because she loved him. He says he will not become a murderer for her but she reminds him that he already is by denying treatment to the other people since he knew full well what was killing them.  McCoy disagrees with Coleman on how to treat Lester, and when Lester drops a hint about how he should be in charge Coleman says her health is up to him. Lester takes McCoy off the case. McCoy protests saying he is in charge of medicine on the ship and his decision is final. Coleman tells Chapel to sedate her (so Kirk can't reveal the truth) despite McCoy's protests.

Act 2-Lester records a log saying that the ship is on its way and now the years she spend studying every detail of the ships operation will be tested. She comments she had now attained her just do, command of a starship. On the Bridge she gives a few orders and then sits in the captain's chair. Lester changes course to Venetia which confuses Spock. She explains they have to take someplace for Lester to be treated, and Spock points out Venetia does not sophisticated medical facilities. When Spock presses the issue Lester finally gets aggravated and tells Spock tp mind the duties he is supposed to be responsible for. Spock says the captain usually deals with that, and Lester storms off the Bridge. Spock clearly becoming curious. In Kirk's quarters, McCoy is aggravated at what Lester did. She says it wasn't personal. McCoy says Coleman has been judged incompetent by Starfleet Command for flagrant medical blunders. Lester says the order stands, and McCoy says that he wants to check her out now. She gets angry and asks why. McCoy says that he has noticed emotional instability and erratic mental attitudes ever since they beamed up. Lester says she will bot submit. In Sick-Ba Kirk wakes up and wonders why he is there. Then he notices that he is not in his correct body. He calls for McCoy when Coleman appears instead. He tries to convince him that he is Lester gone insane. Kirk looks at himself in the mirror and can't believe it.

Act 3-Kirk logs, somehow, about how he has lost track of time and has no idea how long he has been separated from his crew. He plays nice to Chapel pretending that he is fine, and then taking the opportunity to break out of Sick-Bay. In the other room Kirk and Spock are comparing notes on Kirk's odd behavior, rumors of which are beginning to get around the ship. Spock says whatever happened must have happened in the short time Kirk was alone with Lester on the planet. Lester appears, submitting to the exam, when Kirk storms in asking for help. Lester knocks him out, and has security bring him back to the sick-bay. Spock goes to talk to Kirk while McCoy runs his exams on Lester. Kirk has told the Spock the whole story and Spock says that total entity transfer has never been accomplished as far he knows. Kirk says he is living proof it is possible. After mentioning some previous missions to convince Spock, Kirk suggests a Vulcan mind melt. Spock agrees, and after a moment is convinced of the truth. However that is not sufficient proof for Starfleet. Spock tries to leave with Kirk but security stops. In Sick-Bay, it almost seems that Lester has convinced McCoy that he is fine when security alerts to the jail break. Lester announces to the whole ship that Spock has been arrested and charged with mutiny.

Act 4-A court martial convenes and Scotty interrogates Spock. Spock explains how he came to the convulsion and Scotty says that is not enough. They need real evidence. McCoy's report shows no difference between now and the time he took command of the ship.  Kirk takes the stand and explains the life entity transfer but Lester mocks him. Kirk says Lester did this to get the power she craved, to attain a position she does not merit by temperament and training. And to murder James Kirk the man who once loved her. Spock interrupts and asks the crew to consider the possibility that life entity transfer is possible. Lester makes the connection that if it was revealed she was not the captain, Spock would be the captain. Lester appeals to Spock to recant his charges and they will forget this whole business. Spock says he will not. That he is not the captain, she has ruthlessly misappropriated his body and will fight her to his last breath. Lester begins to lose it and calls for a vote on the charge of mutiny. In hallway, McCoy joins Scotty who says he has seen the captain feverish, sick, drunk, delirious, terrified, overjoyed, boiling mad. But has never seen him red-faced with hysteria. They both know that if Spock thinks it's true it has to be logical. Scotty says that he knows how he wil vote, and when they do Lester will throw a fit. And that will be there time move and take over the ship. However, when the two walk into make their vote Lester has heard the comments and orders them all executed. Sulu and Chekov are appalled, the death penalty is forbidden. Lester tells them to get to their posts. On the Bridge, Chekov says that the captain wouldn't order the death penalty even he were going insane so it can't be the captain. Sulu says it doesn't matter, he will fight whoever it is no matter what. Lester gives orders which Sulu and Chekov ignores. As Lester screams at them, she suddenly falls back and for a moment the transfer fades. In the brig, Spock is trying to break the transfer and Kirk says it almost worked he was on the Bridge for a second. Panicked, Lester runs to see Coleman who says Kirk must die to make the transfer permanent. Lester says she can't be the one to do it, and Coleman says he will not kill for her. Lester persuades him by saying if Kirk doesn't die they will both be exposed as murderers. Lester and Coleman go to the brig and lie about the hypo. However, Kirk fights with Coleman and suddenly the transfer is broken. Kirk is back in his body and Lester finally breaks down into Coleman's arms. Kirk comments he didn't want to destroy her. And her life could have been as rich as any woman's, if only.. If only what? The world will never know. 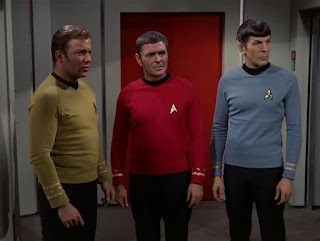 Final Thoughts: I did a whole "Underrated" article on this one so will not rehash everything I said there. The sexism is real in this one, sadly. And there are good things in it. Like William Shatner's acting in the start, and as I've noted Sandra Smith knocks it out of the park playing Kirk in Lester's body. However the criticisms are valid and the goofiness a bit much. It is far from the worst episode of the series, but it's also a sad episode to end the series on.

And yeah, that's it my friends. 79 episodes and done. And by sheer coincidence, we're just shy of the official 55th anniversary of the first episode to air! I am glad that I did this, it's always nice to go back to something years later and see if your thoughts on it have changed. For good or for bad. And some of the episodes surprised me as I watched with older eyes. I will always love this series and franchise. Yeah it has silly things in it and cheap effects, but when you get right down ot it the characters are fantastic and the stories are well done. In fact some of them are still quite relevant in today's world. Congrats for enduring Star Trek, and may it live long and prosper. 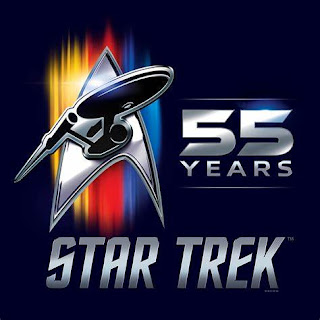