I’ll Be a Mummy’s Uncle 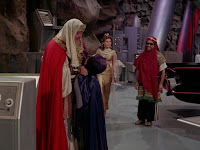 Trivia:There were plans to have this follow the last Tut episode and the plot’s do have similarities. Also Tut’s real name is revealed as William Omaha McElroy

Niitpick:Does O’Hara do anything but stand beside Gordon’s desk all day?

Bat Silliness:Our token female is named Florence of Arabia because that’s such an original joke UGH

Final Thoughts:We see Tut escape from a Psychiatrists office, after putting the therapist to sleep. Tut is searching for a metal considered the hardest in the world to make indestructible objects. And he decides to search for it under Wayne Manor. We also get a stupid sub plot about Barbara helping her father to move. The reason is probably so Barbara can find out Tut has purchased the land he wants to drill. Which is right near the Batcave! Batman and Robin run to stop Tut but it they aren’t fast enough and Tut blasts into the Batcave. I’m impressed that the episode goes all the way with the idea. So we get a big bat fight which, since Batgirl doesn’t know about the cave, is missing her. Of course Batman has a spray that makes everyone forget what they have learned. Tut ran away and is close to revealing Batman’s identity to Gordon and Batgirl but a rock hits his head which finally restores Tut to normal. For good this time.

Grade:A-, So this is what happens when you take a cool idea and go all the way with it. To bad it wasn’t longer but the episode is tight enough that it works fine. And Batgirl served no purpose here at all. She couldn’t even contribute to the final fight because of how the script was structured.