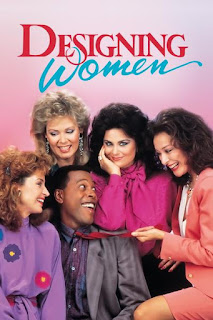 Designing Women premiered in 1986 and I have discussed before how many problems I had with this show. With it's preachy, superior attitude. One episode that pissed me off when I saw it 31 years ago is a prime example of this stuff. What episode was that?

"The First Day of the Last Decade of the Entire Twentieth Century,"

You just know Linda Bloodworth Thomason thought there was something special about January 1, 1990. Ok, sure. i was 16 at the time and don't recall people caring that much, but maybe they did. This episode usually appeared on lists of the series very best episodes, and considering the contents it is hard to criticize without coming off heartless. Or worst. But I hated it when I saw it. By the way the episode really did air on that date.

Over the years I have been going over stuff I hated when I first saw them and reconsidering them, for better or for worst. it's only fair to do the same here. So what happens in his episode? Lets take it step by step. I should mention I watched this on Hulu which from the looks of it used the syndicated version, so it's possible I missed some key lines. 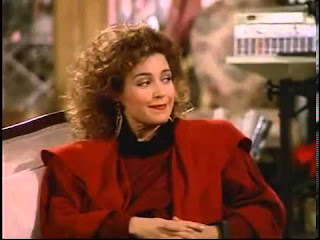 The episode begins very much like a typical episode with Julia and Mary Jo discussing their New Year's plans. Suzanne arrives to set up one the plot points for the episode, Charlee is very pregnant and if she gives birth in time to be the first child born in 1990 Suzanne wins a car. Anthony sets up his date and we get craziness from Bernice, confusing a Christmas tree skirt for a real skirt. 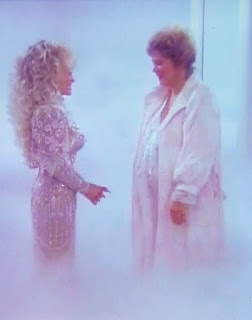 Hard cut to Charlene who is very pregnant. After saying goodbye to her husband Bill, he's in the air force, Charlene lays down and has a dream about meeting her icon Dolly Parton. Of course, it really is Dolly making a then much publicized cameo. The conversation is well written about how Charlene is about to meet her daughter who will not only be her best friend, but the one there when it's Charlene's time to pass. Dolly also explains how the loved one's that have passed will still be there. It's really good stuff and even manages a laugh at the end. The scene ends with Charlene being woken by the girls, they're supposed to go to a movie but Charlene goes into labor instead!

I do like how when Charlene awakens she isn't inspired or anything, she just says she had the strangest dream. That feels more real than her waking up as if she had an epiphany. 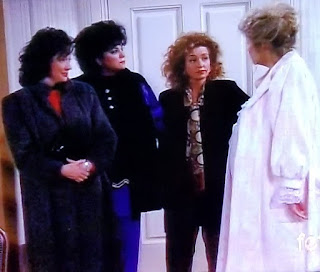 So we get to the hospital where the usual things you expect to see happen. Anthony arrives with his date, who is kinda over the top. Suzanne keeps hassling the staff to see if Charlene has her baby yet. Mary Jo calls Bernice to tell her that Charlene is in labor, and Bernice maker her way to the hospital in a way only Bernice could. It's pretty typical stuff you see in any episode about a character giving birth. So what was Julia doing during this? Let's get to that.... 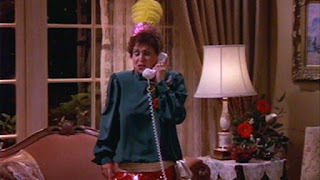 Ok can't put this one off I guess. The script has been pushing the message,or reminder, that as one life begins, another ends. So we know the life that is beginning, what about the other side of the coin? Let's meet Miss Minnie Bell Ward. Julia hears Minnie humming and is intrigued who she is, and the nurse explains she is 102 years old and has lived a long life. Beah Richards was amazing and I loved her in anything she was in. This episode is no exception. The problem, for me, is the tone. What was a typical episode suddenly takes a sharp turn into melodrama. Now a lot of episodes do this, and well, why doesn't it work here? For me anyway. We simply don't know her well enough. The dialogue is wonderful and the acting is beautiful, but I just have no investment.

A show that did something similar was "Growing Pains". In the episode where Maggie has her baby, Ben is feeling bad because he will no longer be the baby. As he wanders he comes across a crusty but kind old man named Chris. In the episode we learn about him, see him form a connection with Ben, and get it when Chris points out he is terminal. Thus, when Ben later happily holds his sister and says the new baby has to be named Chris it works. It's complete Ben's arc for the episode and we get why he would want insist the name be used. In other words, "IT'S CONNECTED TO THE DAMN PLOT OF THE SHOW".

Minnie Bell just doesn't work. First we have the nurse giving exposition on her, and the things she says later are beautiful but she could be talking to literally anyone. There is no connection to anything. It completely hijacks' the plot. Bhea Richards appeared in an episode of "Benson" as Benson's mother, and when she dies in that episode we just spent the whole first half of the shoe getting to know her and understanding her relationship to her son. So it's moving when she dies. It’s funny how one small change could have helped. Namely, why doesn’t she have a scene with Charlene? Minnie discussing the end of her life while talking to someone who is about to create a new life would have been so much better. 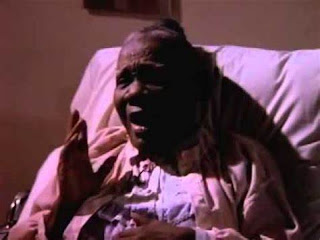 So the scenes with Millie keep swapping with scene of Anthony's girlfriend being loud and Suzanne's whining. What am I supposed to be feeling episode?? Oh and the New Year comes and goes so quick you wonder why they even mentioned New Year's. Oh yeah "it's the first day...yada yada". Finally we see Charlene being brought to the delivery room....and that's it for Charlene in the episode. I'm serious we only see her for another second at the end. So if you wanted to actually see Charlene give birth, sorry. 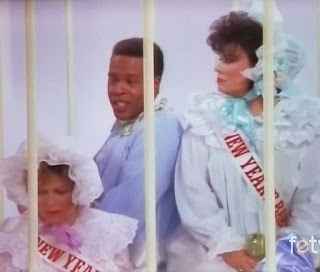 So after we get the sweet scenes with this kindly old lady, it's a good moment for a silly fantasy sequence right?. No seriously, we see Suzanne have a dream about the five of them as babies. I still have no idea what this scene is here for. Padding? So at last we get the final scene with Millie, and it's a wonderful scene. No kidding, go find it it's wonderfully shot and written. Out of context with the episode. But it just doesn't have the weight it should because we just don't her know well enough and the episode hasn't earned the moment. To be fair, Delta Burke does some nice subtle acting as she clearly realizes how self absorbed she was being but no one states it out loud. Millie passes away after giving some great last words, again no joke, and then we get a montage over the song "Somewhere Out There" from the movie American Tale. The montage shows:

-After all crying over Millie we see the gang cheering for Charlene's baby. Yeah, I get it but again the weight is missing. Not helped by the fact the nurse is showing the baby and Charlene is nowhere to be seen.

-Bill getting the news while in his jet. Ok no complains here.

-a shot of Charlene with her baby, Olivia by the way, nd the shot pans out the window to a star while the song hits that part about how we may be steeping under the same star. Subtle. No more dialogue from Charlene on anything.

-Finally we see Dolly walking Millie to heaven, which still makes no sense why is Dolly doing that? She's not dead she was Charlene's "celebrity guardian angel" in a dream. To be fair hearing Dolly's vocals sing a portion of the song is kinda cool. But Millie fades away, and we cut to the black----and me in 1990 wondered what the heck I just watched. 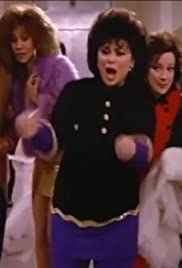 Me in 2020 gets it a little better. It's not awful. And calling it bloated and boring another time was way to harsh, it's neither. Does that mean I think it's a great episode? I would says it's a flawed episode with good things in it. I read the script had several re writes and it kinda shows. You can feel the creators trying but in the end I think it failed more than it succeeded. If you just watch Millie's scene's, they're beautiful. But when you toss them into the episode it gets lost. The episode want to be a New Year's episode, a childbirth episode, a silly episode, a fantasy episode, a "very special" episode and a melodramatic episode and it just does not blend. The tone is all over the place and the ending way to much. I mean you end the episode that dramatically and then the next episode is just another show. I imagine if you are marathoning this series this episode would feel jarringly out of step. And of course, this is just my opinion if you love then go ahead and continue to.

How would I fix it? Don't wait more than half the show to introduce us to Millie. Apparently she was based on a real Meshach Taylor's real grandmother `who had visited the set. Why not make her Anthony's grandmother? That would have been something. And lose the sillier elements, like Anthony's over the top girlfriend and that pointless Suzanne story that goes nowhere. The first half feels like a typical episode, but man does that second part go off the rails and, for me, there is no emotional investment.

One last credit to give this episode. I watched it 30 years ago and hated it-but I also never forgot it. A lot of times I rewatch something and realize I had forgotten many details. Not here, that’s high praise. 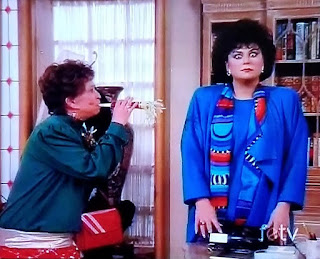 There you go, my take on a thirty year old episode. 2020 has been a rough one my friends, so Happy New Year. I really don't know what I will be doing blog wise next year, but every time I think I am done some idea brings me back. So time will tell. Until then, be good to yourselves.