A Look at TV Network Promo’s


I’ve talked about ways to promote new movies, posters and of course theatrical trailers, but what about TV shows? TV shows have an advantage to movies in that that when a series is a success it kinda sells itself. Word of mouth, or a good time slot, will bring people in. But that doesn’t mean there aren’t ads. I discussed way back when about how TV Guide would have awesome ads in their issues. 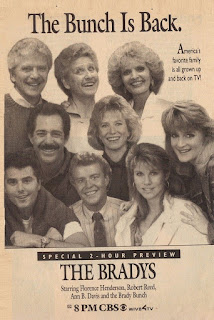 But another way to advertise a show is the classic promo. Promo’s are little ads for the shows which run during other shows and get you to watch. And while they are almost never memorable like a good movie trailer, there’s only so much you can do in fifteen-thirty seconds, if a good promo does it’s job correctly you want to tune in and see what's coming up next, in a dew days, or even the following fall season. So Lets take a look at some examples of network promo's trying to tell you that a certain show is on, changing time's, or is due in the fall! 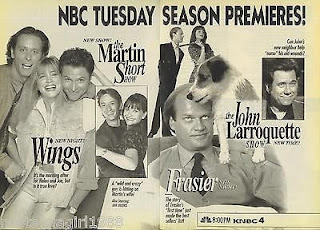 Even when I was a kid, Star Trek was already an icon. And it still baffles me that the show had normal promo’s like any show. It just feels odd, didn’t they know that Star Trek was more than a simple TV show? But like any shows it had to advertise when it came and thanks to YouTube we can see some of these.This one is all kinds of laughable today. No mention of the well written stories, or the great characters. We just get Captain and Kirk and the Vulcanian Spock (thank god the term Vulcanian didn’t last) and apparently all the show is weird action on strange planets. Oh and color, of course.

This one is a favorite of mine. Get the feeling William Shatner did this under duress?

How do you make this family seem cool? You can’t, and the narrator sounds like he isn’t even trying!

And you gotta love this early promo for Happy Days. Who would have guessed what the show would morph into?

So another type of promo for shows that have had a few years is, how do you make sure people know you’re show is still, well, on the air?


I first heard of ALF while watching the Emmy Awards, and the ads got my attention so I tuned in on Monday. The rest is history. This series managed some very clever ads during its run. By the way RIP Max Wright.


So let’s say you have two shows airing back to back which also happen to have two teenage hearthrobs in them. How do you advertise this? Super easy barely an inconvenience! FYI I love that web series.


If you’re gonna do a crossover stunt you’re promo’s but damn well take it up a notch so that people wouldn’t dare miss it!

Sometimes you just gotta have fun, watch as this promo for The Golden Girls turns into one for Quantum Leap!


The early days of Seinfeld had the show having trouble finding an time slot, as this ad demonstrates. The narrator says it would move to Wednesday forever, Well, a season isn’t so bad.

Of course when a show has not premiered yet, you need to get people’s attention. How do you not only get people to understand what the show is but also make them want to watch? Not always easy!

Naturally the Fonz would be brought in to promote Laverne and Shirley. Why do the two look so nervous?


I remember seeing this one for Friends back in the day. It seems clear to me the creators had no idea what the show would be, and the ad embraces that. It also seems clear that they expected Courtney Cox to be the “leader” which never really stuck.

Here’s the same kind of promo for Everybody Loves Raymond before the show premiered. It had the idea down a little more than Friends at least.


So you have a show about four woman, talking. How do you promote that? You have a promo with tjhe four women, well, talking!

Roseanne makes her point in this early ad

Another popular one is the trend of doing a promo for your show by advertising something else unrelated.


or how about these Seinfeld ads made for the Olympics


It’s never easy to say goodbye to a TV series. Here are a few examples of promo's where the fact the show is ending is the key point.


Finally, there are probably worst things than having to make stilted, unnatural promo’s for your show once it enters syndication. But I can’t think of any right now. Here are a few of those:

Of course these are all older shows because these days no one puts any thought into promo’s anymore. Though I do kinda like the promo’s for the new Arrowverse shows on the CW.


Plenty more out there, and I will probably be back with some more in due time.
Posted by RICHB

Email ThisBlogThis!Share to TwitterShare to FacebookShare to Pinterest
Labels: A Look at..., Sitcoms

I loved the 80's and 90's and miss them. These were the best times of my life so I want to share with you the memories of that era from sitcoms to movies to just about anything else! Besides my general discussions of things past I have several sub-categories with regular blogs including What I love in the 80's, episode guides and special face offs. Also have a series called Random Thoughts which covers current things in a more random, little less structured format. I hope you enjoy my reviews and opinions and welcome all debate or criticism. So take a look around and relive some great memories!